AN INTERVIEW WITH VICTOR RODGER 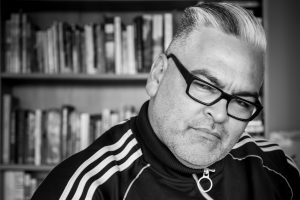 Victor Rodger is a playwright of Samoan and Scottish descent whose plays include My Name is Gary Cooper, Sons and the multi-award winning Black Faggot which has been performed throughout New Zealand and Australia, as well as in Edinburgh and Honolulu.

His first short story, ‘Like Shinderella’, written when he was last year’s Robert Burns Fellow at the University of Otago, was this year included in Black Marks on the White Page, an acclaimed anthology of Māori and Pasifika writing, edited by Witi Ihimaera and Tina Makereti.

His essays ‘A Voyage Round My Father’ and ‘Provocations’ were also published this year in The Best of e-Tangata and The Fuse Box, respectively.

First of all, congratulations on your upcoming Auckland University Residency at the Michael King Centre in Devonport!

Fa’afetai lava.  It comes with accommodation in a house.  Up a hill.  So I really had to think about taking it  (laughs).

So you will be going from this year’s Writer in Residence at The International Institute of Modern Letters (Modern Letters) to the one at the Michael King Writers Centre in Auckland.

That’s a whole lot of residencies! What can you tell me about some of them?

Each of them has been a gift of time and space and money.  A lot of the work to come out of those residencies has been retrospective.  For example, of the two theatre projects I worked on at MacMillan Brown in 2012 one looks like it’s becoming a collaboration with a younger writer and the other has morphed into a proposal for a television series.  And one of the projects that came out of my CNZ-Fulbright residency in 2006 was a collaboration called Puzzy which debuted in Auckland last year and in Honolulu earlier this year.

Is this how artists and writers survive in New Zealand?

Certainly that’s been the case for me the last couple of years.

This year, at Modern Letters, you wrote short fiction as well as developed some new theatre work.

Right at the end of last year I started working on an idea for a collection of short stories and I continued to work on those this year.  The collection has gone through a couple of title changes, but I’m pretty sure once it’s all done and dusted it’s going to be called Warm-ish Pacific Greetings.

I wrote the first draft of a play called Uma Lava which is inspired by Jean-Paul Sartre’s No Exit except mine has three Samoan characters.  That had readings here and in Dunedin as well as Auckland.  And I also worked on a cabaret called Christ(church) Almighty which I put on its feet as a work in progress during the Christchurch Arts Festival.

I went to a couple of your play readings – At The Wake as well as an excerpt from Black Faggot. Both of these works deal with the reoccurring themes of sexuality, family and race, as did your first play Sons, My Name is Gary Cooper, Girl on the Corner and Club Paradiso.

How did you find your way into this voice? What sparked it?

And where is this voice today?

You mean amongst younger writers? Well, the woman I collaborated with on Puzzy is a Samoan-Filipina writer by the name of Kiki.  She’s a lesbian so I encouraged her to represent her point of view because when it comes to lesbian theatre there is very little and when you reduce it to lesbian theatre that deals with the Pasefika experience it’s virtually non-existent.

Your prose piece ‘Like Shinderella’ was included in the Maori and Pasifika anthology, Black Marks On The White Page, edited by Witi Ihimaera and Tina Makereti – we (Maria Samuela and I) went to the book launch here in Wellington and I have to say that I found this eclectic array of work really exciting!

I think you guys missed me and a couple of the other writers reading our stories at the start of the night.  The first line of my story is “After their first fuck…” and of course just as I’m about to read it out I see two young kids sitting in the front row.  FML lol.

Then come late summer, you’ll be in Auckland (at the Michael King Writers Centre) working on predominantly prose fiction – a novel and a collection of short stories.

Yeah, I’ll be finishing the short stories first and then hopefully have some time to attack what I think will be my first novel, which will be called Skip to the End.  ‘Like Shinderella’ is the beginning.  And I wrote the end this year.  Now I just have to attack the middle!

Tell me, is fiction writing a new development for you? Or a return?

A new development, totally.  I come from a script writing background.  Writing fiction is a whole different set of muscles for me.  I’ve really enjoyed the way you can interrogate and investigate situations and characters in fiction.

In your essay, ‘Pacific Writing in New Zealand: The Niu Wave’, you discuss the lack of Pasifika novelists in New Zealand. Why do you think that is?

Well, as some of the authors pointed out in that essay: it’s time, innit?  It’s a luxury that a lot of us simply don’t have.  One of the things driving me to finish both the short story collection and then the novel is to keep Albert Wendt company on bookshelves.

Also, in The Fuse Box, you say in ‘Provocations’ that for you “writing is a political act”, “an act of representation”, and that you sought to explore in your theatre writing “the spectrum of what exists for Pacific casts” – what do you think is the future of Pasefika writers and writing?

In terms of theatre, we do funny ha ha very well, but I’m always on the lookout for work that has teeth, that is really trying to say something.  So I hope the future includes a lot more of us baring our teeth.

And how can we broaden the spectrum of writing voices in New Zealand?

Often when I teach young PI kids in high schools, they think they have to write “white” but when they realize they can use their own vernacular they are generally away laughing.  Talent is never the issue.  And I guess one way to broaden that spectrum is to keep supporting those young ones especially but letting them know that their specific voices and points of view are just as valid and meaningful as anybody else’s.

You also supervised some students at Modern Letters this year – myself included! Being on the receiving end, I had no idea how supportive and stimulating the experience would be. I mean I will never forget our first conversation together where I really felt that I connected with someone from the specific perspective of a afakasi – remember? Ha! It was a real epiphany for me.

Do you mean epiphany or trauma? (laughs).  The thing is, afakasis are all, generally, variations on a theme, right? So we can generally find a way to plug into each other.  I can really only think of only one or two afakasis who wouldn’t play ball, if you get what I mean.

How do you find the supervising/mentoring experience?

It’s true, you learn a lot from the people you are ostensibly trying to help, it’s often incredibly instructive with regards to your own work.

Aside from the IIML I also mentored some emerging short film makers for the New Zealand Film Commission – all afakasis, too, may I add – Tongan/palagi, Papua New Guinean/palagi and Māori/palagi!

Your time with Modern Letters is going to continue for a bit longer with the upcoming summer course Te Hiringa a Tuhi, aimed at students who want to produce works as informed by Māori or Pasifika perspectives, cultures and origins.

I hear that the course is fully booked?

And that it’s “practical” and multi-disciplinary – can you tell me more about this?

It’s six weeks, two classes a week.  It’s a very broad although also very subjective overview of Māori/Pasifika poetry, fiction, non-fiction and TV/film/theatre and the students will get to create a portfolio in the discipline or disciplines of their choice.  Really, I just wanted to teach myself and my cousin Tusiata Avia but I didn’t think that would quite fly (laughs).

I also hear that there will be guest writers teaching some of the classes!

Yip.  Tusiata will be taking a couple of classes on poetry and she’ll be joined at some stage by Hinemoana Baker who used to teach the course and is now based in Berlin.  Tina Makereti who also used to teach the course will take a class on fiction.  And I have a few other people lined up to come and talk such as Tusi Tamasese who wrote and directed One Thousand Ropes and my old mate Briar Grace Smith who has worked across most disciplines.

Lastly, what writing/works is exciting you these days?

Theatre-wise there’s an African American writer called Branden Jacobs Jenkins who’s pumped out some incredibly exciting work such as An Octoroon and Gloria that has really flicked my switch.

I actually bought two poetry books this year (which is two more than what I normally buy), both by African Americans: Don’t Call Us Dead by Danez Smith and There Are More Beautiful Things Than Beyonce by Morgan Parker.

Film-wise I am not ashamed to admit that the script I loved the most this year was Girls Trip by Kenya Barris and Tracey Oliver.

No book rocked my world more than Why I’m No Longer Talking to White People About Race by Reni Eddo Lodge.

And overall no writer really rocked my world more than Talia Marshall, a Dunedin based writer, who has published a handful of absolutely exquisite essays in Pantograph Punch and The Spinoff.  If you haven’t had the pleasure year, check them out especially Please take the rope from my throat so that I may sing.

Nicole Colmar writes stories that have a South Pacific gothic flavour. Her characters are a mix of Kiwi Pakeha and ni-Vanuatu, like her. She is thrilled to have just completed an MA in Creative Writing this year.