A crane is eating

the Holiday Inn.
A few of us

together watch
the slow yet unstoppable bird 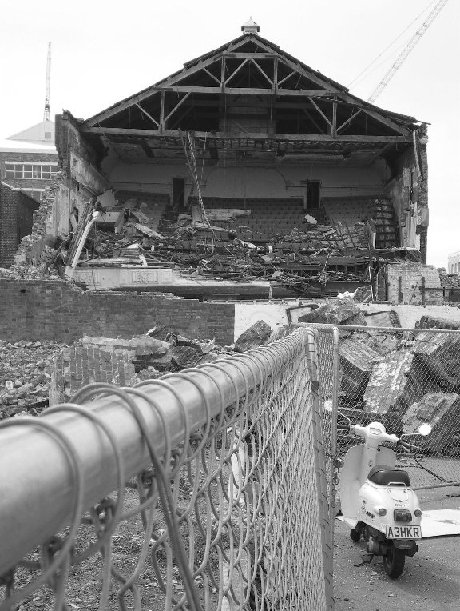 Robert Redford told me to gather all the canned food. He was so calm. Clinical. To use the word ‘gather’ in an emergency situation. Gather it yourself! I squawked back at him then proceeded to try and use my hands to keep out the water that was gushing in through the hole in the side of the boat. I was the person you always fear you’ll become under pressure. Manic. Panicked. Slightly hysterical. The water roared in despite my best efforts so I succumbed to his suggestion and grabbed all the tinned beans I could find. It was of course Robert Redford who had the presence of mind to get the can-opener before we jumped over the side into the lifeboat he had already inflated.

The lifeboat was red and hexagonal, and in those stormy days that were to come when we had to put all the sides up, it was like being stitched inside a soccer ball. Moist air, muted light.

Robert Redford was obsessed with attempting to track our movements. Making little crosses on maps, using a contraption he told me was called a sextant. Whatever, Robert, I thought. He sat and read his stupid book on celestial navigation. He read for long periods. The book was very close to his face. He told me we had to ration food. I thought his lower leg looked fleshy. Meaty. Like a shank. While Robert Redford slept one afternoon I opened all the packets of crackers and ate them heartily. He breathed out heavily in his sleep and I went as close as I could to his face and ate the crackers silently. I sucked on them until they were so soft they dissolved noiselessly in my mouth like snow, like a salty and delicious crystal. Robert Redford did not say anything when he woke up, he just made his disappointed face like he was eating a sour Japanese plum.

Sometimes I felt like I was in love with Robert Redford. I studied him for hours on end. I loved the red bristly hairs on his salty weathered forearms. I loved his thinking face. I offered him the use of my sunhat. I offered to whistle songs that he could try to guess. He laughed at that in a kind and wistful way that made me feel good. I imagined what it would be like to be with him. Not be with him because he was a lot older than he was when Mum used to fancy him in Out of Africa. But you know, maybe just go to a movie together sometime when we got out of this mess. Dinner out. Open a nice bottle of red. Reminisce about the time we were stuck in a lifeboat and I ate all the crackers. Laugh fondly. But then I looked at him again and got real with myself. I realised that Robert Redford probably hated going to movies, hated dinners out and nice bottles of red because he always liked to be brooding about something – at that point his sextant. He could never just let loose and have fun. Robert Redford looked up at me quickly but as though he was not really looking at me, like he was looking through me and thinking about something else. We remained silent. I turned away from him, settled my head on the boat’s edge like a cushion and lifted my eyes out to the night sea, the choppy black hills on its surface.

After days of not talking, finally, in the dark, we stirred to the sound of a huge ship billowing past us. Robert Redford lit a flare and we watched as all our hope flew up into the sky, a signal of red glowing light. It faded into black completely unnoticed, and we sunk back into the squishy sides of the boat. This was not how I had thought it would end. I looked at Robert Redford and he looked straight back at me. His sextant and books were cast away from him now, their pages flapping in alarm. The moon shone on one side of his face and turned his cheek’s rough skin into a set of pale and dangerous mountains.

Louise Wallace is the author of two books of poetry: Since June (2009) and Enough(2013) both published by VUP. Next year Louise and her husband are heading down to Dunedin to begin a new adventure as the Robert Burns Fellow for 2015 at the University of Otago.

Louise says: “In 2012 I was fortunate to be invited to do a reading for the very welcoming Canterbury Poets Collective. The Christchurch poem here and the photograph I took of the cinema with its front wall torn off, capture my two most ‘out-of-body’ experiences from that post-quake trip to the Garden City.” ‘All is Lost’ was inspired by the Robert Redford movie of the same name. She says, “I hope Robert Redford will like it.”