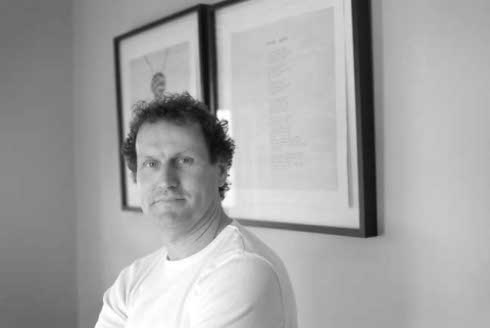 Dave Armstrong has twice won the award for Best New New Zealand Play at the Chapman Tripp Theatre Awards (Niu Sila, The Tutor) and Best Comedy Script at the 2003 AFTA Television Awards (Spin Doctors). His musical play King and Country has played to festivals throughout New Zealand, and the radio adaptation was highly commended in the 2007 Media Peace Awards. Niu Sila (co-written with Oscar Kightley), was performed at the 2007 Pasifika Styles Festival in England. Armstrong co-created the TV comedy Seven Periods with Mr Gormsby which has screened in New Zealand and Australia. His other television credits include Skitz, The Semisis, Spin Doctors, and Bro’town. Dave is the author of True Colours, a satirical account of the 1996 election. ‘Foodbanquet’ — a chapter from his upcoming novel The Speechwriter — was selected for the 2007 Six Pack of writing published for New Zealand Book Month. Dave’s stage adaptation of Sia Figiel’s novel where we once belonged will be performed by the Auckland Theatre Company during the 2008 International Festival of the Arts.

Questions for this interview were supplied anonymously by writers, family and friends. Rachel Callinan managed the interview process.

How do you think your background in music composition crosses over into your script writing — if at all?

Just about everything I have learnt about literary and dramatic structure has a parallel in classical music composition (which I studied here at Victoria). Good dialogue has a rhythm, so if you have a musical ear you can hear it when it works. Plays also need musical variation. A play that is fast and furious the whole time is difficult for an audience to handle, so you need the dramatic equivalent of a slow movement to vary the pace — a quiet scene. Similarly, a play usually needs a climax at the end that accelerates the pace and action, just like the presto last movement of a symphony does.

Will we be seeing an opera or musical (comic or otherwise) from the pen of Dave Armstrong any time soon?

My play King and Country was a musical of sorts, which I greatly enjoyed writing, and I enjoyed conducting the on-stage brass band even more. Funnily enough, I have just been commissioned by Capital E National Children’s Theatre to write a libretto next year for an opera about children in war. I’m greatly looking forward to starting on it. Gareth Farr is the composer so it will no doubt be a lot of fun. I also have an idea for a show featuring me and about 12 trumpets suspended from the ceiling (that’s the trumpets suspended, not me) but I haven’t got around to writing that one yet. Maybe next year.

Did you really play the trumpet on Welcome to Paradise?

Yes! On the last episode. In the past I have played the trumpet for American warmongers, South Korean torturers, sexist beauty contests, the racist Black and White Minstrel Show, so Welcome to Paradise seemed the obvious next step.

Rumour has it you’ve been doing a lot of research this year. What have you been reading, and what have you found that has fascinated or inspired you?

As usual, I’ve been reading a lot of fiction, some of it thanks to my residency here. I attended Richard Ford’s session with Damien Wilkins and that got me reading The Sportswriter, which I’m really enjoying. After reading a page left on the Modern Letters photocopier of Jane Smiley’s Thirteen Ways of Looking at the Novel, I’ve been reading that as well and I’m loving it.

The two plays I’ve been working on during my residency have meant I’ve been doing a lot of research about New Zealand during the McCarthy era, and the history of New Zealand-Pacific relations. I have read scripts held in the Beaglehole Room for a number of Victoria University revues including the 1948 one in which my uncle, GW Turner, penned some subversive political lyrics — now I know where I get it from! I’ve also read the New Zealand communist newspaper, People’s Voice for much of the 1950s which has been at times brilliant (the New Zealand communists were condemning apartheid well before anyone else) and at other times hilarious (‘by the year 2000 New Zealand workers will be commuting to Moscow by rocket in twenty minutes’).

Books by and about New Zealand journalist David Ballantyne, Working Class Son by Ron Smith, Years of the Pooh Bah and Would a Good Man Die? by Dick Scott, and Mau and Black Saturday: New Zealand’s Tragic Blunders in Samoa by Michael Field have also been fascinating reads. A wonderfully prescient 1914 letter entitled ‘Some Niggers’ in which Rupert Brooke worries about Samoa under New Zealand rule is just one example of the fascinating gems I have found in the Victoria University Library this year.

Is it possible for a playwright to achieve true objectivity with a character, ie. without the author’s moral and ethical baggage in tow? (This is not a yes/no question.)

No it’s not and nor should it be. If you want to be objective, study journalism — but even that’s not objective when Murdoch’s running the show. You bring your own moral and ethical baggage, and biases and prejudices to every character. That said, I often find my ‘bad guys’ (such as John Sellers in The Tutor) turn into ‘good guys’ through the playwriting process (and good guys turn bad or at least become more flawed). I have a question I ask myself during the writing of a play, and that is how can I make the heroes worse and the villains better? That brings a sort of moral ‘balance’ to a play, rather than turning it into a polemic or melodrama.

Have you found your way to this profession by accident or do you think it was written in the stars? If, for instance, you’d never met Danny Mulheron would you still be doing what you’re doing?

Given I was writing little comedy sketches for school when I was seven and dramatizing scenes out of books at about the same age I think it was highly likely that I would end up in a theatre-related field. My first real foray into professional theatrical writing came when I was playing the trumpet in a show Danny was directing, but we go back further than that. I think Danny and I first knew we would work together on comedy ever since we got into trouble at school over a cartoon we came up with (his brother actually drew it) in the school magazine involving Joseph and Mary heading towards a sign saying ‘Bethlehem Abortion Clinic’ with three very agitated wise men in the background trying to stop them. Danny got most of the credit yet I had to justify the thing to the very religious (but wonderfully tolerant) school principal — so not much has changed. I suspect the best parts of Seven Periods with Mr Gormsby were actually written when we were both in the third form at Wellington High School in the mid-1970s. There’s lots of time to plan a TV comedy when you’re thirteen and not cool enough to have a girlfriend.

Celebrity death-match … Theatre vs TV — who’d win? If you could only work in one medium which would it be? Which one’s harder?

Theatre or TV? That’s a hard one. I think theatre would win because I feel there are far fewer limitations. My writing tends to be more dialogue and issue-based which suits theatre. I’m not a great one for car chases or action sequences. Also, I love the feedback that a live audience, especially for a comedy, brings. Of course, television is a wonderful medium but, like theatre, is also very difficult to do well — especially in New Zealand. You find you are making compromises all the way — networks, producers, commercial breaks, budget, Broadcasting Standards etc etc. These limitations seem far more inhibiting than the ‘natural’ limitations that theatre has of cast size, set etc. That said, some of the most fun I’ve ever had was writing the first series of Seven Periods with Mr Gormsby, the sitcom of The Semisis and some early TV sketch comedy. A lot of writers go into TV for the money, but unless you earn royalties, and many writers don’t, then TV writing isn’t always a financial bonanza. What’s good about theatre is that if you write a successful play you keep earning royalties every time it’s performed.

What’s the worst advice you’ve ever been given?

Reportage is the enemy of drama. Trust Labour. No one wants to hear about the First World War. One-man shows are passé. That’s too clever for a TV audience. Writing for kids is easy. Writing drama is more difficult than writing comedy. New Zealanders don’t like political satire. Multi-media is where it’s at. Realism is dead.

Rachel Callinan has worked in theatre as a stage manager for almost eight years, but threw down her clipboard this year and completed the Scriptwriting MA, where she was lucky enough to have Dave as her supervisor. Being the only person writing for television in her class (the devil’s medium) she found she needed all the support she could get. Dave’s help was invaluable, and she hopes that by scraping together these prying and often embarrassing questions, from those who know him best, she can somehow show her gratitude to Dave.