I’ve never been friends with men. Women are for friendships, men are for fucking.
– Samantha Jones, Sex and the City

Towards the end of high school, I sent a screenshot with this caption to my friend group’s Facebook chat. None of them replied for more than a day, and it quickly became clear that I was the only one who found it funny. This seemed ridiculous: none of us had any friends who were boys, and when we talked about boys we were either complaining about them or wishing we could have sex with them. We called ourselves feminists. We also called ourselves ‘The Virgin Marys’; a title we were given by a girl in our maths class when she thought we weren’t listening.

I was the first of The Virgin Marys to lose her virginity. This came as a great surprise to me, since by the end of Year 9, Lily had kissed more boys than I have now, and by the end of Year 11, Maya had already given someone a blow-job. Boys have never seemed very interested in me. People think boys love girls who barely wear any clothes, but from my experience, it seems to scare them off. Thigh-high boots and see-through tops can be very intimidating. My favourite character in TV history will always be Audrey Horne from Twin Peaks, because she’s blatantly the hottest one on the show but nobody loves her back. When someone finally does, she says to him: ‘Most boys are afraid.’ This is what I tell myself when I don’t like the alternatives. In Year 12, my friend Bre told me she wished she was as good at talking to boys as I was. When I asked her what she meant by this, she said, ‘You just always seem so cool, like you don’t even care.’ This made me laugh very loud.

Straight after losing my virginity, I invited The Virgin Marys over and made a chocolate cake. We ate about a quarter of it, then proceeded to throw the rest of it at each other’s faces and run it through each other’s hair. My boyfriend Marc took photos.

I have rarely had male friends. Even counting my friends’ boyfriends, it would be two or three at most. The only time I’ve gotten close to a boy in a purely platonic way was at the start of university. We were in the same philosophy tutorial and somehow discovered that we both wrote poetry. I didn’t know anyone else my age who wanted to be a writer, so this felt extremely exciting. I guess I should have known when he said that he ‘liked Ted Hughes but couldn’t stand Sylvia Plath’ that things would never work out between us, but we took two of the same classes and soon we were spending the full three-hour gap between them talking. He would tell me about the girl he’d fallen in love with at Dakota bar, and how she lets guys treat her like shit, even though she deserves better. He would send me a poem about this girl at 4am on a Tuesday, with a message like ‘I know this poem is fucked up, but I’m in a really weird headspace right now.’ By Friday, he would have a new girl to tell me about. Sometime after, I realised I definitely did not want to be friends with this boy, he messaged me, ‘I feel like we’re distant right now. Let me buy you a coffee so we can talk about it.’ We never had that coffee.

In some ways, I am not very good at just being friends with girls either. I may have fucked the first close friend I ever had, depending on your definition of fucking. We would never have called it fucking. We had no idea what to call it. The closest we ever got was ‘Cosmic’. We were always finishing each other’s sentences, or thinking the exact same thing at the exact same time. We were talking about this as we walked out of Midnight Espresso one evening. Our arms were around each other’s shoulders, and three old men standing outside the gay bar next door yelled: ‘Young love!’ We were so surprised we started laughing. ‘So, who’s the lipstick and who’s the bulldyke?’ asked the loudest of the men.
‘Joy’s definitely the lipstick.’

I have kissed most of The Virgin Marys. Our high school sleepovers were what every teenage boy imagines sleepovers to be, except with more crying and more violent massage techniques. Izzy and I kissed on her living-room floor, though I was so drunk I barely knew what was happening. A lit candle fell on my leg and I started screaming: ‘My leg is on fire!’, but in an excited way. When we got up in the morning there were splatters of wax all over the carpet. Marc and I used an iron and a paper towel to get it out while the rest of The Virgin Marys had a bath together. Izzy cooked us couscous with butter.

I made out with Maya after getting Marc’s permission. Maya’s boyfriend lived in a different city, and she was sick of going whole months without kissing anyone. Once, when the two of us were walking up Cuba Street and I was wearing a particularly tiny crop top, a group of middle-aged men yelled at me: ‘You can’t wear your bra to town!’
‘Yes she fucking can!’ Maya yelled back. The two of us are always complimenting each other’s bodies. We agree that one day we’ll probably end up sleeping together.

Lily and I kissed in my bedroom, which my friends had titled the ‘losing-your-virginity-room’ because of all the things I’d stuck to the wall, and the shrine I’d built on my shelves. There were photos of me, Lily and the rest of the Virgin Marys pinned up all around the room, and a Virgin Mary made of vanilla scented wax on my shelf. The one next to my bed was made of plastic, and lit up fluorescent green while we turned off the lights and put on lip balm. Lily and her best friend Hector were finally beginning to admit they wanted to be more than friends, and Lily was scared that in the three years since she’d last kissed someone, she would have forgotten how. It took us at least ten tries before we managed to touch lips. It was like magnets repelling each other: every time we got within a certain distance, we would burst into laughter and take whole minutes to regain control. Lily is a true friend. I have told her multiple times that I knew if I ever started feeling attracted to her, I would be fucked, because I’ve always thought she was the most beautiful of our friends. In high school, the first song we would play at parties was always Like A Virgin. The two of us would dance around the room, whether or not there were other people in it. Whenever we see each other now, we quickly end up playing with each other’s hair.

I will learn all their favourite smells off by heart. I will talk about them to everyone. I will look forward to buying them a birthday present all year, and will probably give them other presents while I’m waiting. I will worry they don’t want to be my friend anymore if they don’t reply to my messages for more than a couple of days. This will make me a little bit depressed. I will listen to all the songs they tell me to listen to, and I will read all the books they think I would like, even if it takes me a while. I will only do some of these things for people I want to sleep with.

There are some friends I have wanted to be closer with for years. One of them is French. She smokes so much her hands shake and she always compliments me at parties. The first time I met her she was snorting Panadol off someone’s kitchen table through a rolled-up twenty-dollar note. The first time she met me – which was actually the third time, but she couldn’t remember the times before – she said I reminded her of a porcelain doll. One of those curly-haired ones, with the pale skin and the eyelashes that are all long, like spiders’ legs. I think she was worried I would be offended. I wasn’t.

She lives in Paris now, and whenever I feel bored or trapped, I imagine dropping everything and flying over there for six months. She could take me to parties every night and teach me how to say ‘Chez moi ou chez toi?’ We could French kiss so many beautiful French boys and maybe even we could kiss too. We could drink Angelina’s hot chocolate on the Metro every morning.

The first time I caught the Paris Metro was on me and Marc’s three-year anniversary. We were grizzly and exhausted and I nearly cried because my suitcase was too heavy to carry up the stairs. Marc was going to leave his at the top and come back down to help, but a beautiful French boy offered to help me instead. I said ‘Merci, merci, merci!’ and he said something I couldn’t understand. As soon as he was gone I whispered to Marc: ‘I would have sex with him.’ I said this a lot over our holiday. When we were walking around the Paris red light district I told him that if we broke up I would move here and live out my slut phase. We didn’t fuck in Paris. We didn’t go to the Eiffel Tower either. We bought a brioche shaped like a penis and took embarrassing photos of each other eating it. We sang along to St Vincent in a lingerie store where everything cost at least 150 euros. We picked out prayer cards and heart lollies to bring back for The Virgin Marys. We kissed sometimes, but mostly we were too busy talking. 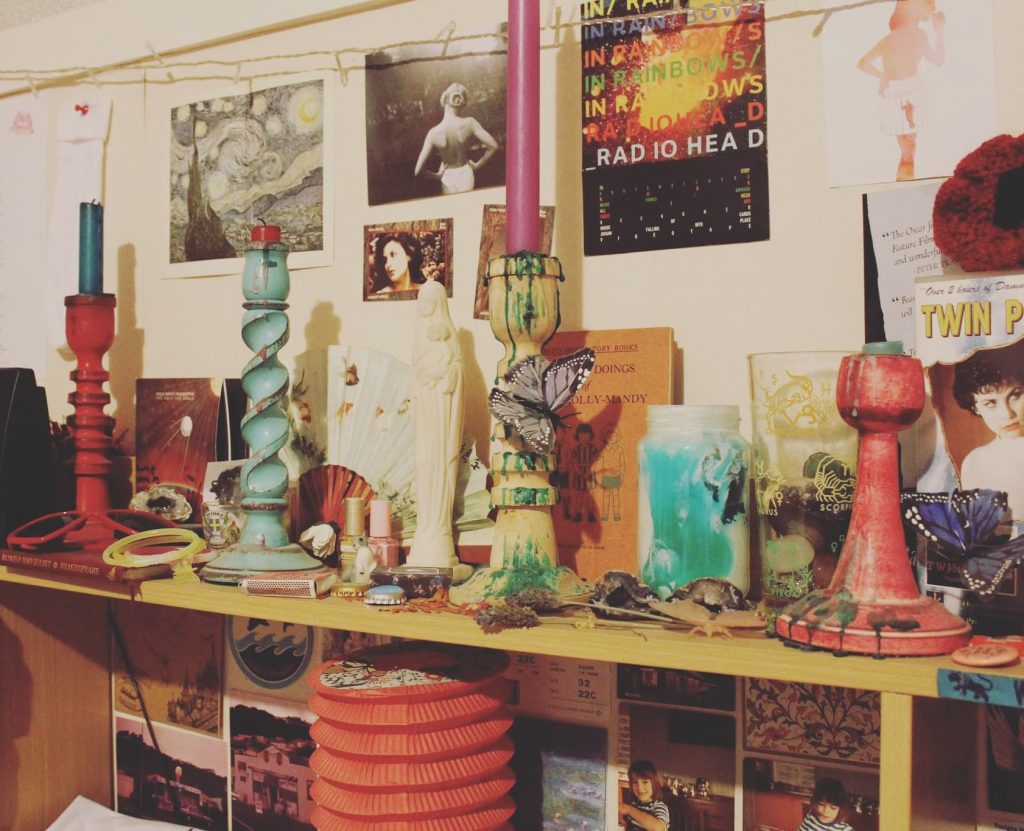 Joy Holley has just completed her degree in English, Philosophy, and Creative Writing at Victoria University. Her writing has also appeared in Landfall, Starling, The Spinoff, brief, Mayhem, and Headland.