From The New Jerusalem

In the tenth century, the Ethiopian kingdom was one of the richest in the world, ruling the trade routes with hard crystals of frankincense. In the Amhara region a child was born and a cloud of bees covered his face. The bees told the baby’s mother that her son would be king. He was named Lalibela.
In some translations ‘Lalibela’ means ‘honey eater’. In others: ‘the bees recognise his sovereignty’.

Lalibela took the throne from his brother, Kedus Harbe, by force. Shortly after, an angel came to him in a dream and showed him a new Jerusalem, high in the mountains. A new River Jordan. A new temple. I imagine him waking, his fingers slick with honey.

Lalibela named the new capital after himself and began work on a labyrinth of churches. The churches were dug, not out of stone but into it, carving out the white space. Each church is a single piece of stone. They sit deep in the earth. I stand on the ledge above them and look down.

Our tour guide, Tesfaye, says archaeologists have worked out how long it should have taken to dig out the churches, and how long it did take. There’s a disparity between the two. It happened too fast. Tesfaye explains that the reason it took half the time it should have is because men worked the days, and angels worked the nights.

We arrived in Ethiopia two weeks ago and we’ve been traveling through the ancient kingdoms in the north. As a child, I lived in Southern Ethiopia.
I thought I would know this place.

Pilgrims climbed these mountains on their knees and I have crawled here through a tunnel of memory that gets narrower at the end, and falls away behind me. I thought I had been here before. I had a memory of standing on a ledge like the one I was on, looking over a rock face, seeing a cross-shaped church cut into the ground. But it isn’t possible. We never came this far north.
Memory is a street with false doors. It’s a house with a trick ceiling. It’s a line of mountains full of caves, full of churches buried in the ground. It’s a grave robber finding treasure put there by someone else.

Lalibela is 9,000 feet above sea level. It’s harder to breathe this close to heaven.

Tesfaye points to a moss-covered pool and says, ‘This is where infertile women are dipped for healing’. Jo asks where the infertile men get dipped and Tesfaye laughs and continues on.
In a cleft in the wall are the preserved bones of two pilgrims. Their skin hasn’t fallen away but has hardened over the bones. I can see the wrinkles in it. I ask Tesfaye how they’re so well preserved, exposed like this, to air and tourists. He doesn’t know. He says, ‘They shouldn’t be. They should have turned to dust.’

He leads us along a high ridge between churches. There are no rails. Nothing to stop us falling. During Timkat the priests form a line across this ridge, standing over the pilgrims in the church below. They dress in white robes. They sing in Ge’ez and wave their arms in unison.
I ask, ‘Is this safe? Has anyone ever fallen?’
Tesfaye laughs, a smile like the Rift Valley. ‘Of course no one has fallen. The angels would catch them.’
On my way back down I spot a hole in the ridge, bees flying in and out.

Tesfaye touches his forehead then his lips to the door post of the church before we go in. He picks up a torso-sized drum and pulls the strap over his head. Goat skin is stretched over each end. One end is wide, the other narrow. The body of the drum is covered in fabric printed with flowers and big red love hearts, the kind I’ve seen in bolts at Spotlight. Leather cord is wrapped over the body of the drum. Tesfaye taps the wide end and sings, bending his knees and dipping down. He says, ‘The wide end of the drum represents the Old Testament. Hear how deep the sound is? How dark? The smaller end is the New Testament.’ He taps this end and the sound rings out further. It’s lighter, the brighter sound of freedom.
Running his hand over the base he says, ‘The fabric is the body of Christ. These strips of chord, they’re the whip marks, the spear in his side. By his stripes we are healed.’

On the way to the churches, Dad had bought a silver Lalibela cross and he walks with it tucked under his arm. He overhears the salesman pointing at him and talking to a friend. Dad starts laughing and translates for us. The salesman had said, ‘That white guy thinks he can speak Amharic.’

In the morning, fog presses in at the windows of my hotel room. I open the doors to the little veranda, and swish my hands through the fog, feeling like I’m under the ocean.
Trying to describe Lalibela is like trying to take a photo of the moon. Never as bright or beautiful.

We fly to Gondar next. We’re coming to the end of our trip. I wrap a headscarf over my hair and follow my new guide, Muhammad, to Debre Berhan Selassie church. We walk silently through the streets.

In the trees surrounding the church are beehives in brown masses. Muhammad tells me that when the Sudanese Dervishes burned Gondar, this church had been saved. The smoke reached the church before the Dervishes and irritated the bees. When the gate was broken down, the bees swarmed out and the Sudanese ran, dropping their torches, swatting their hands about their faces. The only churches in Gondar to survive were the ones with bees.

Muhammad explains that the front door is the men’s entrance, and the side door is for women. I should leave my shoes at the entrance and meet him inside, but the women’s door is locked. I call to Muhammad but he can’t hear me. I tiptoe to the corner where the men’s entrance begins and stick my head around, trying to be as small as possible. Muhammad waves at me, ‘Get back, get back!’
‘Sorry. I’m sorry, it’s just the door. It’s locked.’
Muhammad keeps waving, panic on his face, and I back away, my cheeks red. A tiny old man hobbles forward, shaking his head at me and unlocks the door. I apologise as I pass through.

I’ve come here for the fresco. Sixteen rows of angel heads are painted in between the beams. The angels have no necks, only a pair of wings tucked under their chins. They look like bees. Like a beehive. My own neck seizes from walking with my head bent back.

A memory comes back to me. I’m a child in Southern Ethiopia. My sister Dijana and I were playing outside. Mum was nearby. Jo was sitting on a blanket. Suddenly Mum ran towards us, scooped up Jo, and pushed us forward, telling us to run to the house. A small dark cloud seemed to be chasing us. The cloud got louder as it gained ground. Soon it was droning around my head. Mum pushed me through the screen door onto the patio and slammed it behind us. She ran her hands over our heads, checking to see if anything was caught in our hair. The dark cloud of bees crowded the screen surrounding the patio. They bounced against the mesh.
The memory returns so suddenly, and so vividly, that I don’t know if the buzzing is in my head or from the hives outside.
At the airport the next morning, Jo buys a mug with the fresco on it.

I am losing my memories since we landed in Ethiopia and I can’t get them back. When we drove through Addis Ababa that first day I thought, ‘This isn’t the place.’ I’d built houses along the streets and cleared the footpaths. I’d broken my few memories into spare parts and built something else, then I’d spent my whole life missing it. I’d thought this trip would feel like coming home, but I’m caught in a storm that won’t let me down, which blows me upwards like the mist at Tis Abay. No soft earth will have me. I hover over the waters. 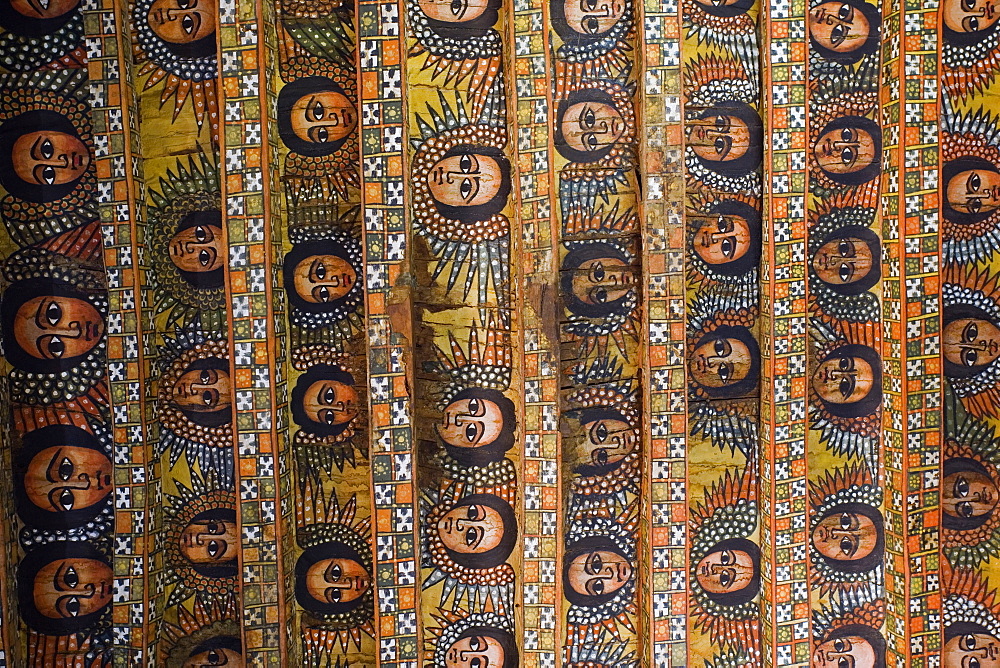 Alie Benge is a writer and copyeditor. Her writing has been published in takahē, Headland, Mimicry, and Geometry. She was joint winner of the 2017 Landfall Essay Competition, and is working on a memoir about her childhood in Ethiopia.