Shine from your deepest inside point, it’s a swollen gold rooster. Become a Buddha stoned, who has gorged on love and half a peanut-butter smoothie. Be a pride made up of various freedoms and techniques. Be a drawn face, serene and precise on an alleyway wall (you know that scrawl you did amid the bins that time? Yeah, be like that). Be the thick smoke of self-belief, adrenalin and perfect teeth.

Say to yourself: my bills (once jutting out of everything) are now a big swirl of kindness and warmth. Imagine the cosmic iron of a cryptic Lord had just glided over them and paid them all. Say ‘my troubles are banished, but they fly into the cupboards of no one for I have somehow forgotten to be vengeful to all of my enemies’. For best results forget how good you are at making enemies.

Say to yourself: my memories are curt, mere empowering flashes. Snippets aglow with my secure character really. They all savage my passages until I feel only glory and the raw honeys of electricity flowing through me. My life is an easy sky, a spellbinding thrust that ripples like a flexing set of muscles throughout this realm. My own physique is a freshly minced cocktail of sacred sexuality and discipline. For best results make your discipline non-competitive.

Say to yourself: my mental condition is a lone karate teacher. A bear-trap for a psyche, it lies in the forest of thought akin to a whale jaw ready to clamp the badly parked car-tyres of negativity. My skull is only comprised of symbolic crickets, warm cloaks and sharp pencils. My every gem and creation soaks up evil like the carpet in the depressing pokie-bar of self-doubt. I wring out the towels of joy with the clean and humble fingers.

Four doors down from your old house
there were two murders
I don’t think it was cruel and unusual
it was just a husband and wife
It didn’t make it into the paper
it was just considered local knowledge
Before I got married yes I had carnal knowledge
I wasn’t used to living in just one house
and I never cared for reading the paper
Someone dies. Someone murders
I was surprised when I became a wife
Everyone said my dress was unusual
I noticed you because you too were unusual
You seemed so controlled and had good general knowledge
‘Name Napoleon’s first wife’
You wiped the floor at that quiz and it was a full house
All my answers were wrong. ‘Crows fly in murders’
(That’s the answer you snuck me on that tissue paper)
So I wrote you a love-note on the same piece of paper
I watched your eyebrows crunch at my words, so unusual
We both loved mysteries, Orient Express murders
Over time I watched my version of knowledge
get confined to this apricot house
and all my poems became about the unsung hero, free the wife!
I was sensitive. Your friends knew you had an emotional wife
On the ground I lay down that newsprint paper
I gave up cleaning the house
It says pine on the bottle but it sure smelt unusual
I read the fine print because power is knowledge
Bored eyes cut through grease and best believe my stare murders
But to be the killing kind, the type that actually murders?
You know, that man who plotted against his wife?
To live with that urge, even that knowledge
So I did the ‘what killer are you’ quiz in the paper
I got Manson, outlandish and unusual
But we love each other, it’s just this house 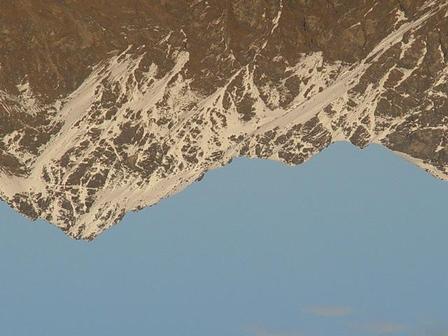 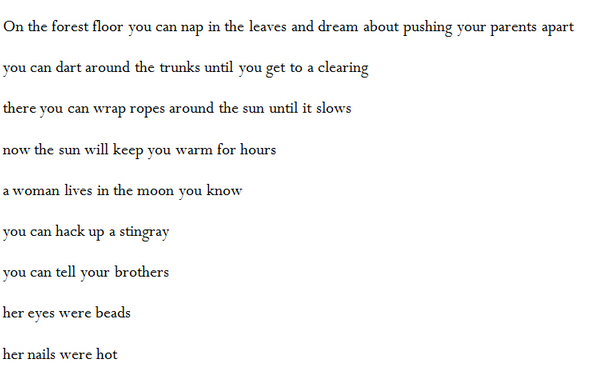 Jessica Hansell has just completed her MA in Creative Writing at the IIML. She is a writer, comic/zine maker, and works as the musician Coco Solid. She is currently screenwriting for the online cartoon ‘Hook Ups’ and this April heads to Seoul for an art residency at Korea’s Museum of Contemporary Art.