AN INTERVIEW WITH JENNY BORNHOLDT 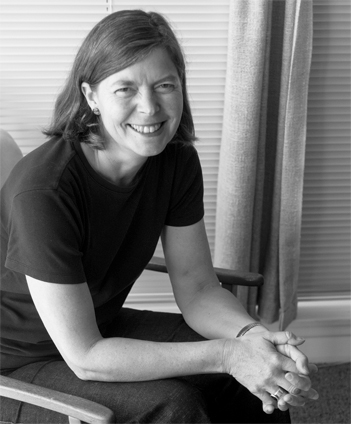 The 2010 Victoria University Writer in Residence was Jenny Bornholdt. Jenny was an early student of Bill Manhire’s creative writing course at Victoria University, before the IIML was known as such. Her first book, This Big Face, was published in 1984, and she has since published eight further books of poetry, including a selected poems: Miss New Zealand. Her latest book, The Rocky Shore, was a collection of six long(ish) poems, described as ‘…as much autobiographical essay as long poems’, and won the Montana Book Award for Poetry in 2009.

Jenny has also been active in New Zealand literature as an anthologist. With her husband – poet and artist Gregory O’Brien – she co-edited My Heart Goes Swimming: New Zealand Love Poems (Godwit/Random House, 1996) and The Colour of Distance: New Zealand Writers in France / French Writers in New Zealand (Victoria University Press 2005). With Mark Williams and Greg O’Brien, she edited An Anthology of New Zealand Poetry in English (Oxford University Press, 1997), which won the 1997 Montana Book Award for Poetry.

Jenny has been an Arts Foundation of New Zealand Laureate, and was the Te Mata Estate New Zealand Poet Laureate 2005-7. This year she has been working on a new collection of poems The Hill of Wool, which will be published by VUP in 2011. She lives in Wellington with her husband and two sons.

This interview took place via email in mid to late November, 2010. Most of the questions were submitted anonymously by members of the IIML community. Hannah Newport Watson managed the interview process.

What has the year in residence meant for you and your writing? Did it go as you expected, following your project proposal, or has it gone off in an entirely unforeseen direction? Does it feel like a departure from or a development of the poems in The Rocky Shore?

The year in residence has been wonderful. You asked what it meant for me and my writing? Well, basically it meant that I did some, which is always good. Finishing a book always feels like a big thing to me, and The Rocky Shore did feel like the end of something. I wasn’t sure what I’d do next, and found it hard to think about which direction to go in. Not that I usually have a ‘plan’, but because that book was such a thing for me, I felt a bit at sea. The memory/forgetting proposal was a way of getting myself started, and I did do a lot of reading around these ideas. It was all incredibly interesting and I made a lot of notes, and then just headed off in my own direction. I think the reading sits below the surface of some of the poems. I’ve never before sat down and read with the idea of producing poems from what I’ve learnt – and it certainly didn’t work that way, but it was a very interesting thing to do. To me the poems are different to those in The Rocky Shore. And that’s a good thing. I loved writing the long poems, but felt I didn’t want to do that again – not at the moment, anyway. These new poems are a deliberate move away from that.

What’s your view of the so-called ‘Hutt Valley School’?  It’s a bit of a joke, no doubt, but does it point to things that you share with some other writers – such as Andrew Johnston, Damien Wilkins, Lloyd Jones, Nigel Cox?

Probably that’s a question for someone not from Lower Hutt to answer. I do enjoy the fact that we all come from there, and do feel connected to the others because of that – somehow growing up in the same place makes you feel you know something about each other. I might just be being presumptuous though.

If not the ‘Hutt Valley school’, is there another ‘school’ that you feel a part of, or have done in the past? Do you feel conscious when you write of being a ‘woman writer’ or a ‘New Zealand writer’? And as a reader, do you seek out certain schools or styles?

No, I’ve never felt part of a ‘school’ – I think that’s one of those labels that gets applied by people outside of what’s going on, or after a period of time when it’s easier to see that ‘something’ was happening. This doesn’t mean that I’m not aware of what other writers are doing. I was thinking recently that the late eighties and early nineties seemed to be a very good time for New Zealand poetry. People like Dinah Hawken, Greg O’Brien, Andrew Johnston, Geoff Cochran, Paula Green, Michele Leggott were being published, and the literary magazines Islands and Landfall were very strong at that time. It seemed there was real energy in the writing. I guess just by virtue of writing at a particular time we all fall into ‘schools’. The ‘school’ thing is interesting because it’s often apparent, looking back, that there was a movement, or whatever you’d like to call it, going on, but this isn’t usually apparent at the time. I think poets are generally busy doing their own thing and getting on with their lives, but maybe at times there’s a kind of energy which passes among a group of writers and lifts them.

I’ve never felt conscious of being a ‘woman writer’, although I’m often made to feel that way because people talk about ‘the domestic’ in my work, as though no one else writes about those things. At one stage I felt I was channelling Mary Ursula Bethell, because I was writing a lot about the garden, but I’m in no way comparing myself to her. I think the need to be a ‘woman writer’ probably ended at the start of the eighties.

I am very aware of being a New Zealand writer, or maybe it’s more of a ‘writer in English’. When I did some poetry readings in France I felt that the way I wrote was completely ‘other’ to how people thought and wrote in that country. Not so in England though. I think there’s a casualness in some New Zealand poetry that’s probably closer to American poetry -I probably read more American poetry than English. As a reader, I’ve tended to go for those relaxed American voices – starting with Frank O’Hara and moving on to Robert Hass, Mark Doty. Those two are more precise than O’Hara ever was and there’s ‘nature’ in their work, while O’Hara definitely preferred concrete. Adrienne Rich was an early favourite, as was Elizabeth Bishop, and Anne Carson. Not that I’d describe any of those women as ‘relaxed’ – they’re incredibly careful and can really nail a poem down. Now I’m thinking of all the English poets I like… More recently I’ve been reading European poetry to try to get some different noises going in my head.

At Writers on Mondays at Te Papa earlier this year, you mentioned reading some childrens’ books to do with memory. What was it that you enjoyed about them? Were there any poetry books you loved as a child?

I was talking about a Tove Jansson story called ‘Grandpa-Grumble’ (in her book Moominvalley in November). It’s the most wonderful story about someone losing/choosing to lose their memory. Her writing is so odd and sad and tender and funny. One of our sons wept when he’d finished the Moomintroll series. He said he didn’t think he could ever read any other books because he loved those so much. That’s how I feel about them too.

I remember reading A Child’s Garden of Verses as a child – and having those poems read to me (we were always read to). When I was a bit older my parents gave me the Voices series, which I loved, and felt very adult reading. Lonely children on swings always appealed, as did wind sighing in trees – I was rather inclined towards melancholy and loved the emotional weight that poems seemed to carry. I can remember certain rhythms from childhood reading, but not actual lines.. I had a book, or story, called The Very Little Girl and I unconsciously replicated the rhythm of a few lines of that story in a poem ‘Rodnie and Her Bicycles’ – I realised where it had come from years later.  This makes it sound as though I read a lot of poetry as a kid, but that’s not how I remember it. As I got older, it was novels that interested me.

The next set of questions are to do with reading as much as writing, and will hopefully create a miniature poetry bookshelf for the curious reader. Was there a book that struck a chord when you first began writing poetry?
Richard Brautigan’s Trout Fishing in America. I loved that book and couldn’t believe that it existed. I didn’t know that you could write like that – have chapters that were only a sentence long; mix things up in the way that he did. I was amazed.

A poetry book that has moved you more than any other or changed the way you see a particular aspect of the world?
This is hard. Praise, by Robert Hass was a revelation to me – I remember carrying it around for months. There are so many books of poetry that I’ve found moving. When I was younger, Sylvia Plath and Adrienne Rich were huge presences, as was Robert Lowell, and Frank O’Hara’s Lunch Poems – these poets showed me that you could write in all kinds of ways. Louise Gluck – I remember being astonished when I first read her poems, they were like prayers. I’m still moved when I read Theodore Roethke’s Glasshouse poems. Or just about anything by Elizabeth Bishop.

A poetry book that was a surprising discovery or grew on you unexpectedly?
This will sound incredibly stupid, but for some reason I thought Robert Frost would be boring! Then I read him.

A book that is in close harmony with the way you write?
This isn’t a proper answer, but the book I think most about is Housekeeping by Marilynne Robinson.

A book that puzzles you in a good way?
Anything by Mebdh McGuckian. She makes the most interesting sounds on the page. On one level I mostly don’t have a clue about what she’s on about, but on another, she makes complete ‘sense’ to me.

A book that satisfies you, in the sound that it makes?

Lorine Niedecker’s Collected Poems. She writes these tiny, strong, sad poems that make me feel I need to lie down for a week. She also writes long sequences that are full of melancholy and loss, but never self-pity.

A book that showed you something new about writing poems or influenced the way you wrote?

Michael Ondaatje’s Running in the Family. Along with Brautigan’s book, this was a revelation about what you could do in a book. The structure of Ondaatje’s book sort of gave me permission to write the ‘Sophie’ sequences in my first book This Big Face.

A book you have never read but would like to?

Beowulf translated by Seamus Heaney and Milton’s Paradise Lost. I’ve got them both out of the library at the moment, so there’s hope yet…

Hannah Newport Watson completed an MA in Creative Writing at the IIML in 2010.