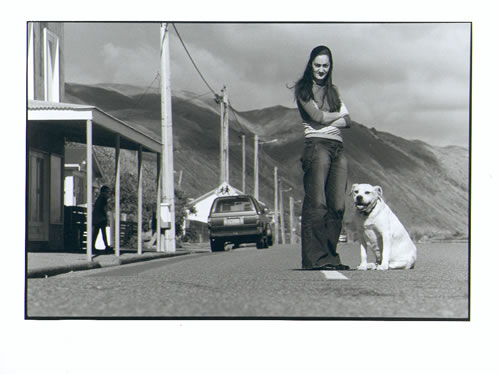 Briar Grace-Smith has been 2003 Writer in Residence at Victoria University. She has divided her time there between her short story collection Weaving Tangaroa’s Eyebrows, a feature film script The Strength of Water, and a number of theatre projects. This is an edited transcript of a conversation that took place in her office at the IIML on October 8th. The interview was conducted by Renata Hopkins, an MA Student in Scriptwriting.

R: So Briar, it says on the Vic website that your main focus during the residency will be finishing your collection of short stories, Weaving Tangaroa’s Eyebrows.

B: (Laughs.) Oh yeah well … I haven’t finished it, but I’ve made progress on it. It’s been one of several things, as usual. I can’t focus on one thing. I’ve done some rewriting. I’ve just reworked a play that was performed at Bats in 2000, called When Sun and Moon Collide. And I’ve polished up Potiki’s Memory of Stone, and worked on my film. So yeah, while it’s been my steady thing, I’ve been able to look at other things as well, which has been good.

R: You’ve been working a lot on your film, The Strength of Water as well. What stage is that at now?

B: Hopefully it’s getting there. It took a big step … backwards. I mean, I think I overworked it, so I’ve gone back and had to look at what it was originally about, because it had lost some of its essence I guess, some of its original spirit.

R: What draft are you on now?

B: I’m really confused about what draft I’m on. (Laughs) I go by the date now, but it would probably be about draft eight.

R: Do you have someone who is mentoring you through that process, or are you on your own with that?

B: Well, my main mentor is Troy Kennedy Martin, who lives in England. (Troy Kennedy Martin is a much revered British screen writer who Briar first met when he was one of the script advisers on the inaugural Aotearoa Screenwriters Laboratory set up by The NZ Writers Foundation. This took place in the Waitakare Ranges in 2002. Briar’s feature film script The Strength of Water was one of six scripts chosen for the Laboratory.) He can only very occasionally give me feedback, so I do meet with the producer and director and get feedback from them, and we’re about to do a read-through, which hopefully Ken Duncum will dramaturg. But Troy’s been the person who’s stuck with it from draft one, so every now and then when he gets time he has a read and gives really solid advice. And because he’s stuck with it he’s been able to see what it’s gone through and go ‘Oh, hang on. What have you done with the last couple of drafts?’

Films are a new process for me. I’ve learnt so much about writing for film by just sitting down and doing it. Not reading about it and talking about it. Finding my own way through the trials and tribulations of it all.

R: How do the different forms feel for you? Because you’re swapping between short story and film and theatre. So how do you re-orient?

R: Is it a relief to be able to go from one form to another?

B: I always say ‘Oh this will be the only film I’ll ever do.’ And then I go and work in theatre—I mean, I love theatre, but I’ll go ‘Oh god. This is the last play I’ll ever write.’ (Laughter) So, you do really appreciate other mediums.

R: Lately a few people in the scriptwriting class have been saying they wish they were writing a novel instead, because you can describe what the characters are thinking, whereas in a visual medium you have to find a way to show it.

B: I guess what I really love about drama is the characters coming to life. They become real tangible people.

R: How do you maintain your stamina for something like a film script, which can run on and on for years in development?

B: This has been quite hard. But I actually took a big break during this year, which I think you have to do. I don’t think you can keep on and on re-writing the same thing, because you stop seeing what the problems are. It just becomes this THING you want to get finished. So when I took a step back for a couple of months I could see these things that just so obviously didn’t fit. Big clunky things that I hadn’t even noticed before, because I was so immersed in it.

But there are always pressures when you’re working with other people. Film and theatre are quite collaborative. There are certain pressures that come with working in collaboration. I really like working in literature, on the short stories, and I think that’s what appeals to me about a novel—that it’s up to me.

R: There is a degree of having to make yourself quite thick skinned about other people’s take on things.

B: Oh yeah, especially in film. And in theatre because [other people] have ownership of it too. But if you can have one running mate, someone who’s with you all the way, and who’s not too involved, like I’ve had Troy over in England … He’s miles away, but he’s like the Eye of God. (Laughs) I think you have to maintain your integrity as a writer and remember that no one knows these characters as well as you do.

R: Do you feel like there’s a particular story for you? One that you’re telling over and over?

B: Yeah, I probably am. I’m probably telling the same story again and again, and it’s something about … the underdogs. They’re the characters that interest me. They’re the people that society normally views as people who don’t count so much, or who mainstream society has a stereotype about. So, being able to play with those people, and get inside their heads. And to tell stories that you don’t hear much about. I wrote a play ages ago about the Maori Battalion. At that stage I hadn’t heard much about their story. So, to find out more about what they went through … because they’re sort of unsung heroes.

R: Do you think New Zealanders are getting better at listening to New Zealand stories?

B: I think so. You know, Whale Rider, I think that’s made a difference, given us a bit of a boost. But we still have to be reaffirmed by everyone else.

R: How have you found it going into schools to give readings, with Toi Maori and the Book Council?

B: Amazing. That’s probably the most rewarding thing you can do. They’re into it. And especially, I find with young Maori kids, when they recognise and see themselves in what you do.

R: Can you tell me a bit about the collection, Weaving Tangaroa’s Eyebrows?

B: Well it’s been going on for a long time now. The trouble is … I started a long time ago, and some of the stories … I don’t like them anymore. (Laughs) Which is always a danger.

R: Do you think that’s inevitable, to always be moving past your work?

B: Yeah, always. I always think that. I watch plays, even not long after I’ve written them and I think, ‘Oh I’m over that now.’ I’m not over the performance, or the production, but my writing … I just want to do the next thing.

Tangaroa’s Eyebrows is the name that refers to the pingao, the native grass that grows on the beach, so that story is about a young pingao weaver. There’s another story set in Wellington inspired a bit by the wind. The god of the wind comes into a contemporary urban story.

They say when you write a collection of short stories there should be a common thread. So I thought, ‘Well what is the unifying theme?’ And I think it’s that they’re all inspired by something elemental. I think that’s enough. Pretty loose, but … (Laughs)

R: How do you find your starting point? What’s the first niggling thing that you want to unravel?

B: Usually it’s a whole lot of things. There’ll be several things that spark with me. Like a character I met, or a walk I had on the beach the other day, and what the weather was like. It’s throwing them all together, but usually it comes from a character, and me thinking long and hard about that character.

R: Do you think the Kapiti Coast has an influence on your work?

B: There’s something about living there … The sea is so wild. My house sometimes shakes from the impact of the waves, and I’m a hundred metres away from the beach. And there are all those stories that go with the island. So you’re constantly looking over at Kapiti and thinking through those stories.

R: How has it changed things for you to have this office to come to?

B: I just love it. It’s fantastic. Because at home I work in a really domestic space. I’ve got three kids, so it’s very full on. I used to work at the kitchen table for years and even now that I’ve got an office it’s still part of the house, and so the phone rings and … it’s just very hard sometimes to say ‘Oh, that’s not a pile of dirty washing outside the bathroom.’

So, I can sit here and know it’s a work space. It’ll be really hard to leave it. It’s that thing of being spoiled and suddenly you have to go back to real life. I’ve had the support of Ken and Bill and Fiona. And the students too. Being in a place where there are other writers in the building. There’s that creative buzz.

Renata Hopkins was a member of this year’s MA in Creative Writing (Scriptwriting) class. Her folio project was a television drama series.